When confronted with the evidence from the lunar rocks brought back from the Apollo missions, it was difficult to confirm theories 1-3.  The evidence is compiled in the table below:

As a result of the pieces of evidence in the table above, in 1984, a new theory of the moon's origin began to gain attention. The new theory stemmed from the recognition that the early solar system 4,500 million years ago was a more violent place than had been previously assumed. Rather than being filled with swarms of 10 km diameter planetesimals accreting directly into the four inner planets, it was realized that accreting matter would form embryonic planets with a large range of sizes in closely spaced orbits. The final stages of planetary formation would involve the coalescence of often rather large bodies, punctuating this era with giant impacts in which bodies of comparable size crashed into one another at high speed. The chaos of this era explains the wide variations in orbital inclinations, eccentricities, rotational periods and spin axis directions observed among the inner planets at present.

A giant impact provides just the right circumstances for a body with the moon's peculiar chemical composition to arise according to this new theory. The vapor squirted from the contact point between the proto-earth and the impacting smaller proto-planet would consist predominantly of material from the mantles of the two objects and should exclude core metal. Condensing in space, the high-speed cloud of rock vapor would preferentially incorporate refractory elements, while volatile elements would be slow to condense and hence may be greatly depleted. The large amount of angular momentum brought in by the projectile would mostly go into the orbiting debris, although the proto-earth would also be spun up. From the angular momentum of the present earth-moon system the projectile must have had a mass comparable to that of the planet Mars.

The computer-generated images to the right illustrate the first 30 minutes after a Mars-size protoplanet collides with the protoearth with a contact velocity of 8 km/sec. This contact velocity corresponds to a relative velocity of nearly zero at the initial large separation. These images are the result of a 3-dimensional hydrocode computation using the CTH code.  The metallic cores of the projectile and target are shown in pink and light purple and their  mantles are shown in orange and green, respectively. According to the theory, the plume eventually condenses into dust, some of which remains in orbit to later accrete into a proto-moon with an initial orbital radius of about 10 earth radii.  It appears that this simulation shown at the right depicts an earth that is literally flattened due to a Mars size planet impact.  Both are vaporized.  One can only wonder whether an event like this can be true or not.  Are scientists attempting to fit a theory with the data or trying to fit the data to the theory.  One can only wonder - you can decide for yourself.

This simulation did not require any super computer.  I ran it using a four-core Intel i7.  The whole simulation took approximately 15 minutes of CPU time to complete. 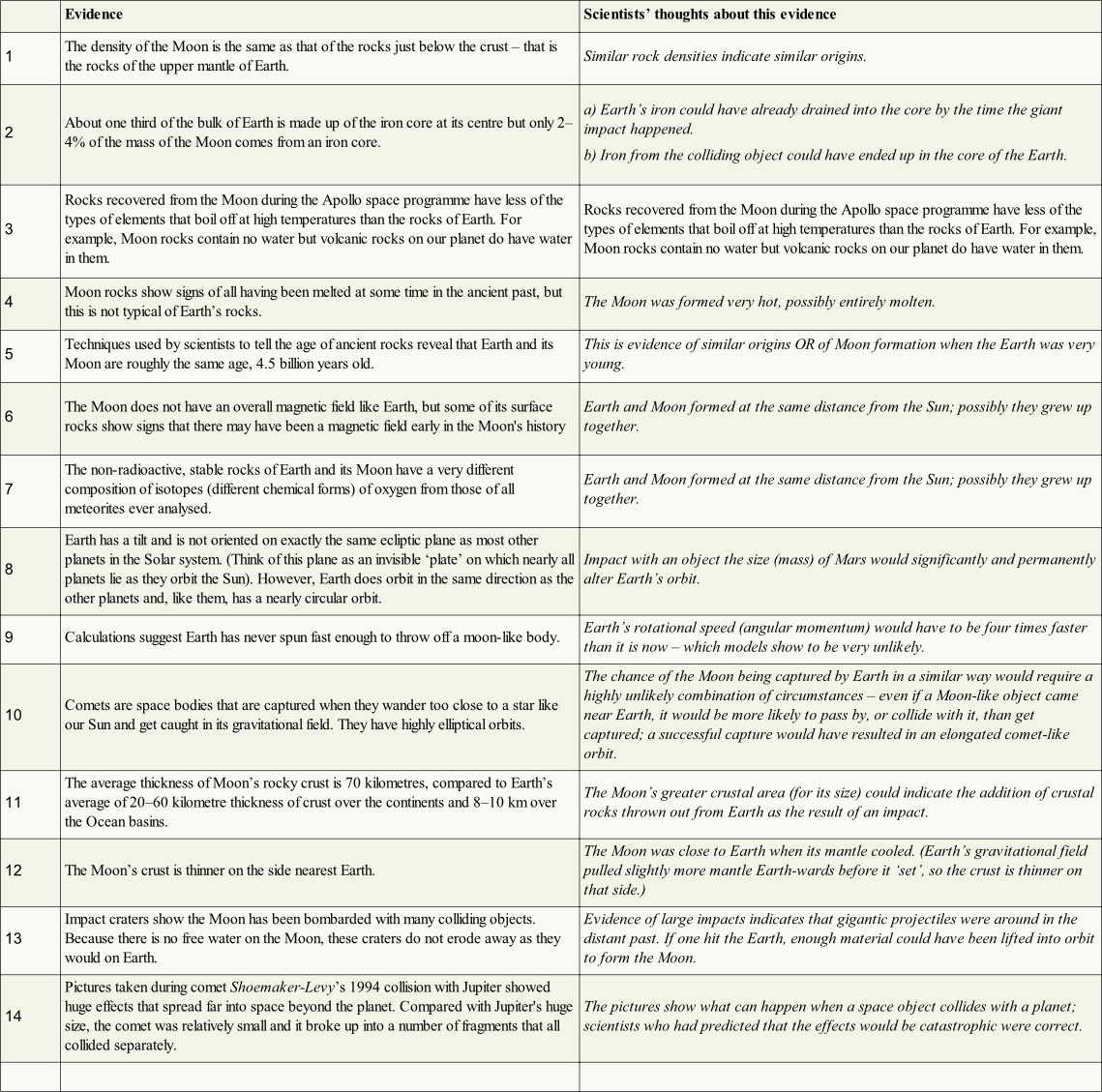 The moon's origin has been the subject of scientific speculation since ancient times.  From the “Man on the Moon” theory to the cheese composition theory of the moon, the moon has definitely had its place in history as an icon of controversy.   Galileo in 1609 took great leaps forward in observational astronomy and showed, probably to the dismay of others, that the moon is a rocky body like our earth.  Of course, his heliocentric stance of the solar system nearly got him burnt at the stake from the religious leaders of his time so any other theories he might have had on the universe took a sudden halt.  Society now has in some sense become a little more civilized and a little more tolerant of more modern theories of the universe and one who proposes such theories has a safe haven to speculate, write, and a freedom of expression.    Before the Apollo landings began in 1969 there were three different theories of its origin:  1)The fission theory, proposed by G. H. Darwin, Charles Darwin's son, supposed that the moon was spun out of the earth's mantle during an early era of rapid rotation of the ancient earth; 2) the co-accretion or "double planet" theory supposed that the earth and moon simply grew together out of a primordial swarm of small "planetesimals"; and 3) the capture theory which supposed that the moon formed somewhere else in the solar system and was later captured in orbit about the earth (see summary table below).